LEARN FROM THE SOLAR EXPERT

Learn From the Solar Expert 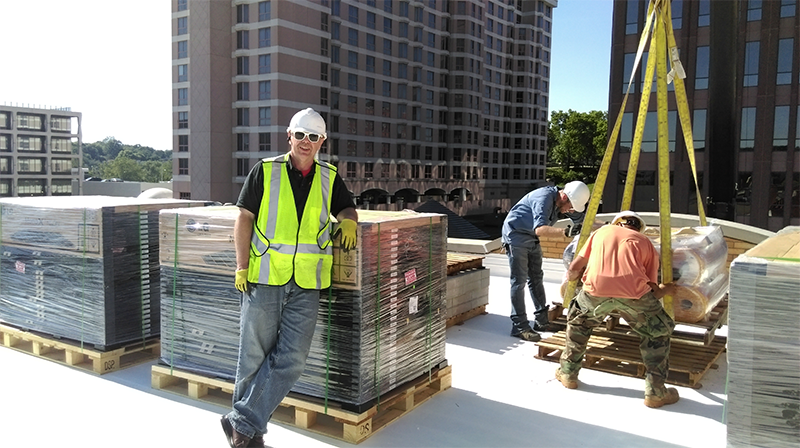 While the president consistently talks about creating jobs in America, our clean energy sector is busier than ever producing them: 3 million and counting, according to new government data.

These jobs, spread across the country, include 2 million workers making homes, buildings, appliances, and other products more energy efficient. That saves families and businesses money.

Another nearly 500,000 Americans work in clean power generation, including wind and solar power; 200,000 more work in advanced grid and biofuels; and yet another 200,000 are employed in clean transportation such as hybrid, electric, and fuel cell vehicles.

This clean energy boom is a shining light on the American jobs and manufacturing landscape.

But President Trump has promised to gut the Environmental Protection Agency’s Clean Power Plan aimed at cleaning up dirty air that makes us sick and drives climate change. In doing so, the president would be throttling the strongest engine of job growth in our country: clean energy.

We can’t afford to lose momentum in what is a key economic play of our lifetime—the global race for clean energy.

That’s why Senator Claire McCaskill was right when she recently rejected Scott Pruitt to lead the EPA. She stood up for the interest of the people, environment, and economy of Missouri.

It was clear before the vote Pruitt wasn’t right for the job. As attorney general, he’d sued the EPA more than a dozen times, often joining with fossil fuel interests, to block health and clean air protections, including the Clean Power Plan—which also will propel clean energy.

That became much clearer this week when the Oklahoma attorney general’s office, on court orders, released thousands of emails showing how deep Pruitt’s ties run to the industries he’s now entrusted to police. Pruitt so ingrained himself with energy companies that they referred to him and his allies as “the fossil energy AGs.”

The emails and his record show a public official using his office as a platform to advocate on the fossil fuel industry’s behalf. That doesn’t instill much confidence that— now that the Senate has confirmed him as EPA administrator—he’ll abandon his fossil fuel allies to advocate instead for clean energy.

We’ll be looking for Sen. McCaskill to continue looking out for us in that arena because the national trends of clean energy growth are underway here, too, in Missouri.

Those clean energy workers represent 1.9 percent of Missouri’s workforce today. But the state has the highest projected clean energy growth rate in the 12 Midwest states surveyed, an estimated 8.3 percent.

Missouri could reach that horizon by promoting more energy efficiency measures and action to create jobs installing wind towers, solar panels and solar energy systems. About 4,200 Missourians are employed now in these fields. Many more could be.

That’s because at this time Missouri generates less than 5 percent of its power from renewable wind and solar sources. The untapped energy source is ripe for expansion, and we’ll all benefit.

It’s certainly one way to keep jobs in America by growing them at home, in places like Rolla, Springfield and Joplin, as well as St. Louis and Kansas City.

This is why we’re grateful Sen. McCaskill stood against Pruitt’s nomination, and why we know she’ll hold him accountable to treat all sources of energy fairly, especially clean energy and the good-paying jobs it engenders. Continuing to do so will protect our future and the prosperous lives we hope for our children.

Bob Solger is the founder of Solar Design Studio, based in Platte City

What Our Clients Are Saying

We owe a great debt of gratitude to Bob and his knowledge and team for helping to create an amazing PV carport for us. I’m sure you would be delighted with whatever you engage him to help you with.

I have had the pleasure of working with Bob for several years. In the beginning, Bob taught me important basics. Over a short period of time I was equipped with the language and tools to develop projects which resulted in more than 7 million dollars of sales. Over the past 5 years Bob has been a tremendous resource handling everything from initial ROI analysis to system design, rebate/ utility paperwork, city permitting, material sourcing, and final project paperwork. I can truly say Solar Design Studios played a major role in my success.

A sincere Thank You!

Bob Solger is Mr. Solar to the Kansas City region. With a passion to forge change and be green well before it was cool to do so, Bob has led the regional market as an engineer and spokesperson for the adoption of solar energy. He completes his projects professionally and continues to inspire by teaching others how to get the most from solar installations.

Stay Educated On Solar With Our Blog